Building accessible sites is hard. I’ve learned a lot about the basics this past week, but it seems like there’s no end.

There’s a variety of disabilities, screen readers, devices, browsers that make it “almost” impossible to build sites that are truly accessible to everyone. But I’ve also learned that pareto’s principles applies to accessibility on the web too.

There’s a few things we could do to make our sites accessible to a larger number of people on the internet. A huge part of that is Semantic Markup.

Semantic HTML as the basis for web accessibility

Documents are the basics of the web, documents are hugely composed of text. This makes a lot of sense to me. The content of a site, no matter how complex, can be distilled to text and that text can be read out or communicated to anyone despite their disabilities.

Mastering the art of semantic HTML will take longer than anyone thinks. Ideally, we shouldn’t use divs and spans where there’s an HTML element that best describes the content. (See rule 1 of ARIA use) The problem is remembering all HTML elements. For this purpose, I’ve gotten a few HTML cheat sheets to help me remember them.

I’ve also downloaded a few browser extensions to help test my HTML markup for things like inappropriate use of h1-h6, section headings, and other common markup mistakes. One of those extensions is AXE accessibility.

It adds an axe tab to the devTools and you can audit any site for Semantic elements and ARIA use. 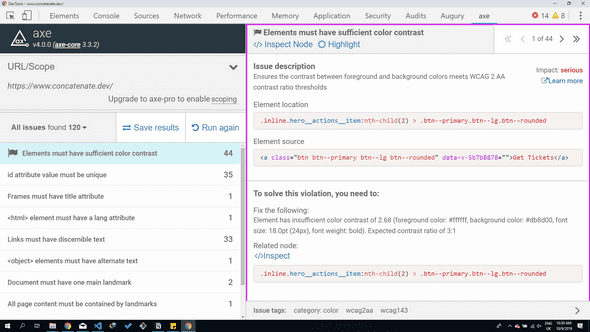 There’s also http://wave.webaim.org/, which is a site for outlining HTML elements and detecting errors in markup. You just paste your live URL and it analyzes the site.

Both have been useful so far…

This is something I’ve never done before, but I’ll include it as part of my workflow.

You can validate your HTML markup with the W3C Validator

I shared what I learned about them in Learning about ARIA attributes. ARIA attributes are useful for giving screen readers and assistive technologies more information about HTML elements. Mastering ARIA is an art, but I’ll also make a cheat sheet for them and try to use them in my projects.

The following resources have been invaluable to me, you can also check them out

This section of my 12 weeks of UX Engineering is over. I’m moving over to CSS where I’ll learn about modern CSS layouts, progressive enhancement and CSS motion.